As the environmental and virus crises converge, we must shift in the recovery phase to zero-waste business models.The short-term cost will secure a future for our companies in the long-term.

Plastic and other garbage polluting in the Adriatic Sea. Photo Credit: Barcroft Media .

Humanity is living in an ecological deficit: we have been plundering natural resources for the past 50 years. Our planet cannot sustain the stress caused by more than 7 billion people. The COVID-19 pandemic has shown us just how interconnected human behaviour is to nature.

As a result of the pandemic response, we are seeing the environment bear the collateral damage of increasing plastic waste. And according to a recent study in the journal Science, the world is on track to triple plastic waste flowing into the ocean in just two decades.

What will happen when, as projections indicate, we reach 9 billion people by 2045?

It is clearer than ever that we cannot go on like this.

As the COVID-19 crisis continues to unfold, we are seeing the tragic outcomes of the failure to transform the way we consume energy and cultivate land.

Food supply chains, which were already fragile from under-investment and over-depletion of natural resources, are now broken. These conditions threaten to increase the number of people living in chronic hunger, estimated globally to be more than 800 million pre-pandemic.

With a lack of ambitious global action, the impacts of climate change also loom. While many have applauded the dip in carbon emissions due to global lockdown measures, 2020 remains on course to be the hottest year since records began.

In Australia, communities hit hardest by this year’s bushfires are facing even greater challenges with the health, economic and social impacts of COVID-19. And they face far greater likelihood of being hit by these fires again, putting recovery further out of sight.

The analysis featured in Science predicts plastic waste entering the ocean each year will nearly treble by 2040, from 11 to 29 million tonnes. While current actions and commitments have made some progress in the effort to tackle this challenge, the Breaking the Plastic Wave study shows these actions will only reduce business-as-usual ocean plastic flows by 7 per cent.

Left unaddressed, plastic waste in our oceans will have severe consequences for the millions of lives and livelihoods that depend on marine health, leaving us even more vulnerable to shocks like COVID-19.

We are currently at a convergence of crises. We can, and we must, build back better.

This means moving toward a circular economy, an economy that is restorative and regenerative by design. As we shift from the response to the recovery phase of this crisis, we must aim for a zero-carbon and zero-waste world.

For some challenges, the solutions are not yet evident, for others, including plastic, they are far clearer. Before the pandemic hit, global momentum behind new initiatives to eliminate, innovate and circulate plastics was growing. We cannot afford to let these efforts fall by the wayside. Focusing on efforts to stop plastic waste could present a trillion-dollar economic opportunity, one our world needs now more than ever.

Earlier this year, Ikea committed to replacing the plastic foam packaging in its products with a regenerating mushroom-based packaging. Dow has taken on a number of initiatives to reduce plastic waste, including turning multi-layer packaging into recyclable mono-material.

Borealis and SYSTEMIQ, with the support of the Alliance to End Plastic Waste and Nestlé, are building circular waste systems in south-east Asia through Project STOP. Meanwhile, Adidas is manufacturing millions of recyclable shoes from recycled ocean plastic.

While these innovations are encouraging, alone they are merely a drop in our plastic-ridden ocean. Until used plastic becomes a valuable commodity, we have a problem, which we are running out of time to fix.

Minderoo Foundation’s Sea The Future initiative seeks to rapidly create a global market mechanism that will boost the supply of post-use plastic to replace virgin, fossil-based plastic, and increase demand for recycled materials across the value chain. This will eventually build up scale in recycling and in doing so will bring down the price of recycled plastics, thereby narrowing the price gap between virgin and recycled plastics.

This collaboration also involves publicly tracking the financial and product flows in the plastics industry to shine a light and provide greater transparency on exactly which companies are hindering or helping.

Minderoo Foundation is also working with leading researchers globally to better understand the human health impacts of plastics, specifically nanoplastics, as well as taking on the challenge of how to create scalable, practical solutions to recover plastics from our oceans.

It is efforts like these, combined with innovative business practices, that will put us on the path to a circular economy coming out of this crisis.

We cannot return to business-as-usual when it comes to any aspect of our economy, and that includes our relationship with our planet and its resources. In recovering from this pandemic, we can no longer choose profits over our planet. What might cost us in the short-term will secure a future for our companies and societies in the long-term.

The health of all people and our world is on the line, and we have no time to waste. Let’s build back better toward a circular economy.

This article by Mark Barnaba, Andrew Liveris and Martin R. Stuchtey was originally published by the Australian Financial Review on 10 August 2020. 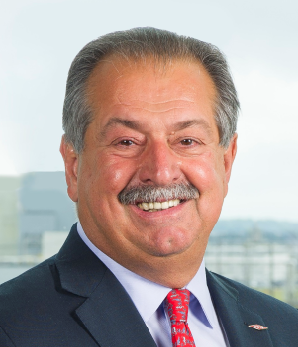 Andrew N. Liveris is the former Chairman and Chief Executive Officer of The Dow Chemical Company and director of DowDuPont. He previously served as Executive Chairman of DowDuPont.

A recognised global business leader with more than 42 years at Dow, Liveris advocates the criticality of manufacturing worldwide. He is the author of Make It in America and was tapped by the current U.S. administration to help identify new ways to spur innovation, revitalise the U.S. manufacturing sector and drive economic growth and prosperity as chair of the manufacturing council and a member of the apprenticeship of the future task force.

Previously he served as Co-Chair of U.S. President Obama’s Advanced Manufacturing Partnership steering committee and a member of the U.S. President’s Export Council. he was recently named Senior Advisor to the Saudi Arabian Governments Sovereign Wealth Fund, PIF. He sits on the Board of Directors at IBM, Worley and Saudi Aramco, on the advisory board of Sumitomo Mitsui Banking Corporation and NEOM. He is the past Vice Chair of the Business Roundtable, and Executive Committee Member and past Chairman of the U.S. Business Council, and a member of the Concordia Leadership Council and the Australian government’s Industry Growth Centres Advisory Committee. He served as a trustee for The King Abdullah University of Science and Technology (KAUST), the California Institute of Technology, and the United States Council for International Business. He was the founding member of The Nature Conservancy’s Latin America Conservation Council.